Day 6: When They Grow Up and You Just Get Older

I’ve been seeing a lot of former students lately.  Occasionally where there’s something going on at the high school level groups of kids will return to school to come visit.  They don’t know this, but I relish those moments.  Seeing their teenage faces, hearing about their successes in high school, these things make me happy.  It’s always so funny to watch my current class gasp in wonder when a group of teenagers walks in the door.  Of course, they are overjoyed at the interruption in the middle of math class.  But I wonder if they see themselves in those teenagers, it won’t be so many years before they grow up too.  Their changes will by physical (getting taller, deeper voices, teenage acne) and emotional (first loves, the uncertainty of choosing a college, emerging into the job world).

Of course when I hear of students from my first class heading off to college I start to feel old.  Which is no comparison to teachers I’ve worked with who have taught a student and then that student’s child! But still.  However, even though I continue to age, I’m not growing up.  You see I’m growing down.  Working in the education field gives you the distinct pleasure of getting to stay connected to your inner child.  For example, the other day I was testing out a robot and rolled it into a fellow teachers classroom in the middle of a lesson.  It was childish.  We all had a good laugh.  Seeing life through each new generation’s eyes keeps us connected to some fundamental truths about life.  Good instruction is important, but so is having fun and taking time to play.

My former students will have to grow up, face the harsh realities of adulthood some day.  I’ve been there and done that.  I may be getting older, but you can’t make me grow up.

I pulled into the parking lot this morning and happened to glance down at my dash. 38,000 miles and 10 degrees.  That just about sums it up, right?  It’s funny how numbers sum up our lives in the most mundane ways.

They tell you both something and nothing at the same time.

This slice feels unfinished to me today.  There is more to this idea that I want to share, but the thoughts won’t form in my mind.

The streets are filled with the muck of winter, thick piles of slushy filth mixed with oil and pollution.  I step gingerly over frozen mounds of slushy snow hoping with each tentative step that I won’t slip and fall in to the abyss of winter filth.  Oh how I yearn for a heavy rain to wash it all away and clean the world.  Make it fresh and new, the smell of spring in the air, that first bud on a tree.  Oh how I yearn for the days when I have to gun my car over a frozen snow bank just to launch it into a parking spot.

I step tentatively from the car, moving quickly on my toes, lifting my pants up so as not to dirty them.  I fly across the slushy mushy street before a passing car can spray me, watching each step carefully.  Why must it be so….oppressive?  For now the light burning from the coffee shop window is my only sunshine.  My latte my only breath of something fresh.  I can’t wait for these slushy, mushy, dirty, gross days to be over.

Day 2: Dinner on a weeknight

On the days that I have to pick Gigi up from daycare our rides home can be long.  Despite the fact that she has a snack as “school” and a snack in the car she is usually tired and hungry by the time we get home.  A tired and hungry toddler is a dangerous creature.

I don’t spend a lot of time preparing dinner. I usually toss some combination of a fruit, a carb, and a cheese on a plate before I flop into a dining room chair and rub my aching brain.   For starters there usually isn’t much time before critical mass is hit. The atomic bomb has nothing on a “hangry” kid.  Then there’s the fact that she is very likely to refuse to eat what I’ve put in front of her.  That’s if I’m lucky.  If I’m unlucky I scrape it off the floor silently sobbing to myself and whispering under my breath “you’re not the boss of me.”

Sometimes I get lucky and she’s in a good mood.  We chat as she eats and I make myself something or sit down and just join her.  Usually I buy silence and sanity with an episode of Daniel Tiger.

Dinner on a weeknight is mostly about getting everyone fed without having any major accidents, meltdowns, or child welfare checks.  Sometimes it’s a nice “family dinner.”  But mostly it’s just a matter of survival. 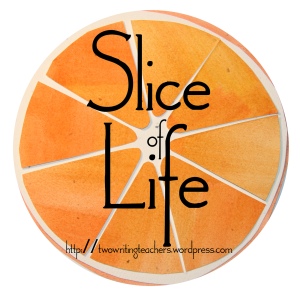 The annual March Slice of Life Challenge is hosted at Two Writing Teachers.

For the past year I’ve been spending most Saturday mornings at a little coffee shop on Damen Ave. with my writing partner Kristin.  Over the months our newest book has been taking shape fueled by massive amounts of coffee (what else?), the smell of bacon smoke in the air, occasional 80’s power ballads, and the general feeling that we’re trying to make a difference in the world.

Most of these mornings were spent on a big green leather couch stationed at the back of the room.  An ideal place for writing, people watching, and generally overseeing the goings on of the coffee shop.  One recent morning I walked in to find that the couch had been moved.

My first thought was “what the heck? why did they move the couch?”

My second thought was “what is in its place?!?”  There in the back of the room hogging the space that our beloved couch had once lived in was a retro reddish orange kitchen table.  I glared at it in disgust and distrust.

Our beloved green home had been moved to the front of the coffee shop, right in the middle of the chaos and was now joined by another couch.  It was an overall unwelcome change.  Now chaos abounded around us, other people invaded our space, and our writing mojo was thrown by the constant din of the door banging shut.

“The music is too loud.”

“The light is all wrong.”

“It’s too far from the outlet.”

The next week I felt anxious walking in the door.  I trudged slowly to the back of the coffee shop and set my bag down tentatively on the table.  I unpacked slowly, hesitantly as if the table might blow up at any minute.  As I set up my computer I ran my fingers over the tacky laminate surface noting the old coffee stains, the scratches along the edge.  This table had history.  This table had a story to tell.  It was then that I thought perhaps it was fate, that this table was put here for a purpose.  A storytelling table for two storytellers. 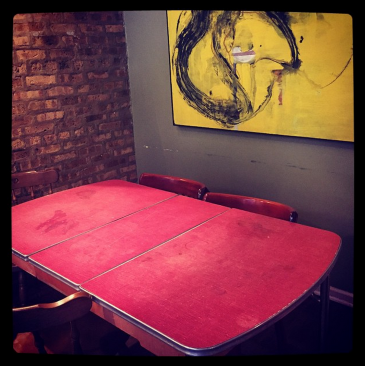